You are here: Home / Archives for car shipping vicksburg 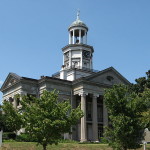 The city of Vicksburg is a smaller city on the western border of Mississippi that sits along the Mississippi River. Though the area had been inhabited by Native Americans for centuries, it was first settled by Europeans in 1719 as a fort in the wild Mississippi frontier. It began to grow in population after becoming a part of the United States and the city proved to be a crucial trading post along the Mississippi River during the years before the Civil War. During the Civil War Vicksburg was a … END_OF_DOCUMENT_TOKEN_TO_BE_REPLACED